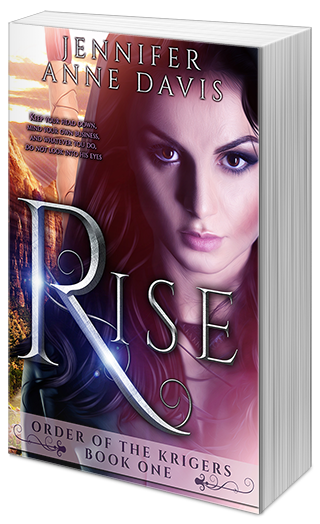 The people of Nelebek live in fear of persecution from the evil Morlet, who reigns with a dark and destructive magic. The kingdom’s only hope lies with the Order of the Krigers—twelve warriors with mysterious powers linked to magical weapons.

For over a century, Morlet has been annihilating the Order, picking them off one by one. Eleven Krigers have been hunted down, tortured, and imprisoned in his dungeon. Now, only one remains.

Sixteen-year-old Kaia survives by keeping her head down and minding her own business. But when she finds herself in the middle of a public execution where the mysterious Morlet is in attendance, an odd compulsion she can’t resist comes over her.

Soon, an ancient power awakens and Kaia can no more blend into the scenery. Will she heed the call of the Krigers or will Morlet’s dark magic destroy the last of the Order?

I have loved every book i have read by Jennifer Anne Davis she has a talent for creating characters that make you laugh, cry and cheer. I loved the banter between Kaia and the assassin it really had me smirking and laughing through much of the novel.

“By killing people. You’re no better then the king.” I love how this echoes throughout the whole book as a strong part of Kaia character she really has a heart for everyone even those who seek her death.

“I have been assisting Krigers for year, in all my time no one has questioned me like you” another part of Kaia character that frustrates the assassin to no end but gives a chance to find out more information as we go through the story. As the assassin say “Fortunately, i haven’t had to deal with any other female Krigers, or i would of killed myself by now” Though Kaia has her own opinion of the assassin as she says He was lucky the other eleven Krigers weren’t girls. Otherwise they would killed him for his pigheadedness by now.

As Kaia comes into her strength and gets ready to find her weapon she is very determined to the point that she says “then be prepared, because it’s not if i pass, but when” of the trials she must indure to be found worthy of being a kriger.

Kaia continues through the story to show great strength as she faces loss and questions the true feelings of those she interacts with. As the book comes to a close we are well set up for the next book in the series and what is in store in the battle between Morlet and the Krigers.

Jennifer Anne Davis is the award-winning author of the bestselling TRUE REIGN series. After graduating from the University of San Diego with a degree in English and a teaching credential, she married her high school sweetheart. Jennifer is currently a full-time writer and mother of three highly energetic children. Her days are spent living in imaginary worlds and fueling her own kids’ creativity.